Let me tell you something...clowns are not my cup of tea. I don't hate them, but I never really liked them either. I always feel like they are hiding something. So naturally, going to see The Terrifier, a movie about a predatory and demonic silent clown at my favorite haunt, The Screening Room sounded like fun! Andrew (my hubs) and I met a few friends out. I warned them beforehand that I laugh at inappropriate things and to my surprise they do too! Yay! I have friends that share my same sense of gory humor!

The Terrifier was again brought to The Screening Room by the Buffalo, NY contingent of Dread Central. (You can read my review of The Lodgers movie that they brought to Buffalo here.) I'm happy that there's a venue and audience to support limited release underground horror movies in my city. I can't wait too see what movie will be next!

What I didn't know is that Art the Clown ~ potential horror icon ~  has been in other movies ~ news to me! This sinister madman, had his debut in two short films, the 9th Circle (2008) and The Terrifier (2011) and his first full length feature is All Hallow's Eve (2013) ~ a Halloween slasher anthology. (I'll have to check that out, knowing my love of Halloween movies.) There was an All Hallows Eve 2 (2015), but no Art the Clown *insert sad clown face* Who needs to see that one if there's no creepy clown?! 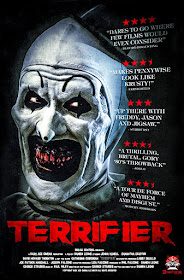 The movie starts out with an interview from the faceless massacre survivor. Ok, so this tells us there is a "final girl", but she's much more erratic than any final girl we've seen before. I won't tell you why.

Now we backtrack to Halloween night when two girls, Tara and Dawn, are leaving a bar drunk, so they stop for pizza. Art the Clown begins to follow them in his passively creepy and mime-like way with his garbage bag arsenal slung over his shoulder. He gets kicked out of the pizzeria, slashes the tires on the girls car, and kills the workers at the pizza joint. Tara calls her sister, Victoria, for a ride, but in the meantime Tara has to pee and goes into the building they are stuck parked in front of to find a bathroom. The building is vacant because it's being bombed for rats...except it's not vacant, there's a loony woman living in the basement that talks to a baby doll and Art makes a killing room within it's walls.

Eventually Dawn, Tara, Victoria, Exterminator 1 & 2, and baby doll lady are locked in this building and victims of Art the Clown. There is plenty of gore, most of it is shown close up and bloody. There's one kill that's pretty brutal, and I've seen it written about as "misogynistic", but I think Art does it because he's a deranged psycho. You'll know it when you see it. Maybe that's why his name is Art, his kills are done ART-fully. (Bahahaha pun intended.) The ending has a tiny plot twist. I won't tell you who the lone survivor is or what happens to Art.

Some things I didn't like, is that you can tell it was filmed in parts, so the acting fluctuates throughout. Also if you are going to hit a psycho over the head in self defense, don't just hit him once, keep hitting him, don't wait for him to get up, attack him when he's down, and if possible always chop their heads off. Phew, ok that's the final girl in me talking. Sorry I got sidetracked...now the bonuses...

A couple things I really enjoyed about The Terrifier are the two main gals are dressed for Halloween, one is a "Sexy" skeleton and she could be a double for young Neve Campbell, and one is a "Sexy" SCARECROW! You can read about my love of scarecrows here. Hell, maybe someday I'll be a Sexy Scarecrow for Halloween! 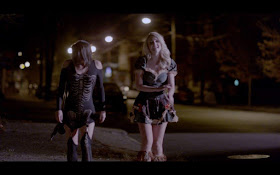 Next there's a real life kitty in the movie. He's friends with the loony lady that talks to a doll, and he doesn't die! Yay! A cat in a movie that doesn't die. (It's becoming a rare occurrence. I wrote about it in my The Shape of Water review.) In the end credits you'll find out his name is Scorsese. Adorbs!

The music paired nicely with the scenes, built on the suspense, and added to the atmosphere, especially when the main character is a silent clown! You can buy the soundtrack that was scored by Marilyn Manson guitarist Paul Wiley here. 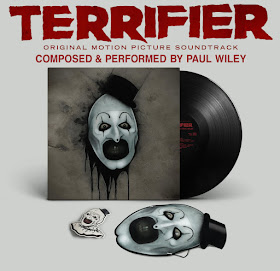 Art's pantomime reminds me of The Gentlemen from Buffy the Vampire Slayer. His exaggerated blackened smile is the same too. My love for Buffy is strong, so it was the first thing I noticed. 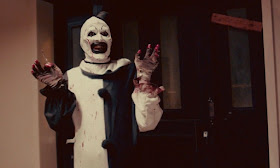 Art the Clown & a scalpel.

The Gentlemen & a scalpel.

Art the Clown is NO Pennywise or Twisty, if anything he gives off some Silence of the Lambs and Jigsaw vibes.  I actually laughed more at this movie than any comedy I've seen and really that's what clowns are supposed to do, make you laugh! In my mind he makes me LIKE CLOWNS EVEN MORE. There I said it. You betcha there will likely be a sequel. I give it four and a half out of five clown horn honks (say that fast). 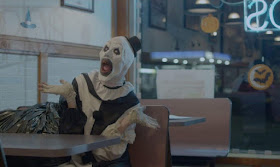